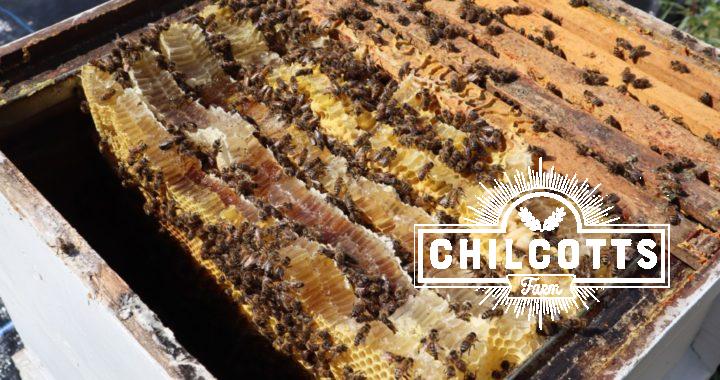 Last year I housed a honey bee swarm I collected from the local area. On returning, I put the swarm into a new hive with about half the intended frames I had to hand. I needed to assemble more and intended to put the remaining frames in the following day.

However, I didn’t get the chance to return to the hive for a couple of days. At this point the colony had drawn wild comb which was hanging from the crown board (the lid on the top of the hive).

In a dilemma, I decided to leave the hive until the following season and sort it out then.

Yesterday, was the day. In the main picture you can see 5 pieces of wild comb. Each of these were packed with brood (growing baby bees).

I took three pieces of the wild comb and attached each piece into a frame using elastic bands (not sure how this will work). I then transferred these to a new hive with new frames. The new hive was put back in the same place as the original hive.

I couldn’t find the queen, but hopefully she was somewhere amongst the existing frames or was brushed off into the new hive as I removed each piece of wild comb.

Now all tidy and manageable, the hive can be easily inspected. Next week, I will go in and see if I can find the queen or evidence that she is still laying.